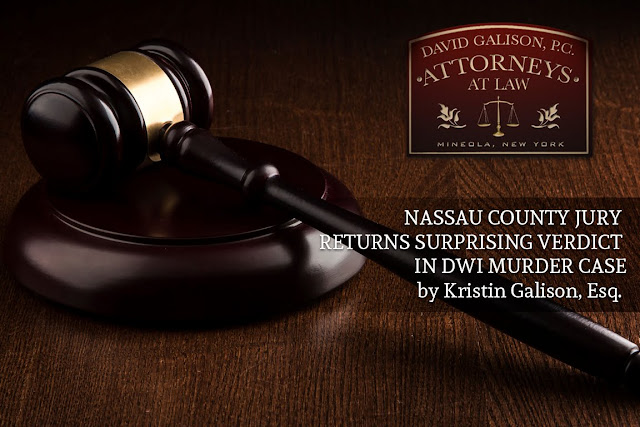 Ryan allegedly had a blood-alcohol level of 0.13 when he was driving home on the Long Island Expressway almost four years ago and crashed his car. He fled that accident scene only to crash his car again further down the road. Officer Olivieri of the Nassau County Police Department responded to the scene and was killed when the driver of another vehicle hit into him. No criminal charges were brought against that driver.

The death of Officer Olivieri is a tragic loss for his family, the police department and the citizens of Nassau County whom he protected. There is no denying that.  However I believe that the verdict in the case against James Ryan is wrong.  Yes, Ryan was drunk driving on October 18, 2012 and yes, that is a crime. Should he have been found guilty of Driving While Intoxicated? Absolutely. But should he have been found guilty for the death of Officer Olivieri? No. It is my opinion that the death of Officer Olivieri is too far attenuated from Ryan’s drinking and driving to have found him guilty of homicide. The person at fault for the officer’s death is the other driver.  The other driver clearly wasn’t paying enough attention while driving on the Long Island Expressway that night because if he had been he should have seen Olivieri’s police vehicle, as well as Ryan’s damaged vehicle before coming up the scene and striking the officer.  That’s not to say that his actions make him criminally liable for the officer’s death, but neither do Ryan’s actions.

The Nassau County District Attorney’s Office has a history of pushing the limits and setting precedents in DWI cases. They are one of the toughest, if not the toughest county in New York State in their plea bargaining guidelines for DWI cases. The Nassau County District Attorney’s Office was one of the first in the country to successfully convict a DWI driver of murder. The office made national headlines in 2006 in the case against Martin Heidgen when a jury appropriately found Heidgen guilty of two counts of depraved indifference murder after slamming his truck into a limousine and killing a seven year old passenger and the limo driver.

While I commend the District Attorney’s Office for taking a hard stance against DWI cases giving its prevalence on Long Island, I think they went too far in the case against James Ryan. This verdict sets a dangerous precedent for future cases. Imagine the following scenario:  An officer pulls a motorist over for speeding on the Long Island Expressway. The motorist pulls over to the side of the road but to an area where there is barely a shoulder. As the officer walks towards the pulled over vehicle, another car drives by and strikes the officer.  Is that speeding motorist liable for the death of the officer? The verdict in the Ryan case seems to indicate that he would be. Both DWI and Speeding are against the law and in the Ryan case and in my hypothetical an officer was killed as a result of investigating the crime. So where do you draw the line? This recent verdict has the potential to lead to a very slippery slope.

I am sure that Ryan will appeal the verdict in his case and I am very interested to see what the outcome will be.

Kristin Galison is a former Nassau County Assistant District Attorney experienced in all aspects of criminal law. Ms. Galison was assigned to several bureaus during her tenure with the office including District Court where she specialized in Driving While Intoxicated (DWI) cases and County Court where she prosecuted both misdemeanor and felony cases.