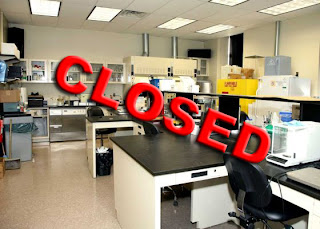 Photo credit: Newsday website, a file photo of the Nassau County Police crime lab in Mineola, edited.
On Friday, February 18, 2011, the Nassau County Crime Lab was ordered closed by County Executive Edward Mangano. The closure of the crime lab is based upon allegations that Nassau County Police supervisors may have know, as early as September of last year, about inaccuracies in the testing of the drug Ecstasy. Kathleen Rice, the District Attorney of Nassau County, was quoted in Newsday as saying that she had asked County Executive Mangano to shut down the lab “because supervisory activity and potentially intentional personnel conduct relate not only to the drug chemistry testing performed at the lab but to the entirety of the lab.”
Prior to the closure of the Nassau County Crime Lab, the lab had the dubious distinction of being the only police lab in the country to have been placed on probation twice. The American Society of Crime Laboratory Directors had placed the lab on probation back in 2005 and again most recently in December 2010.  The recent probationary status was due to 15 serious violations that authorities found in the lab. Among the violations listed were defects in the maintenance and calibration of the equipment that measures blood alcohol.
The county’s Acting Director of the Forensic Evidence Bureau, Pasquale Buffolino, Ph.D., recently issued a letter to Mr. Robert Stacey, Staff Inspector of the American Society of Crime Laboratory Directors, which addressed the violations. To view the letter that addresses the labs deficiencies click on the following link: Crime Lab Issues
As a result of the lab’s failure to properly perform drug testing, and maintain and calibrate the equipment used to measure blood alcohol, motions are currently being brought by Nassau County defense attorneys to set aside criminal convictions. Roughly 9,000 drug cases from between 2007 to 2009 are being called into question. The number of DWI cases that could be affected by recent revelations is unknown at this time but clearly it is significant.
Driving While Intoxicated (DWI) cases where breath readings were taken using machines maintained by the Nassau County Police Department are particularly troubling since it has been revealed that the calibration devices in the police lab were not checked yearly as is required by national standards. The lab’s failure to adhere to national standards makes prosecuting these cases questionable, difficult and perhaps unjust.
What is even more troubling for the Nassau County Police Department and District Attorney’s Office is that on Thursday, February 17, 2011, Detective Lieutenant James Granelle, former Nassau County Crime Lab Director, admitted while testifying before the Honorable George Peck that he had informed his commanding officer(s) about the problems at the lab as early as 2006.
Meg Reiss, Kathleen Rice’s chief of staff, indicated recently that U.S. Attorney Loretta Lynch, who heads the Eastern District of New York, will be keeping in touch with Rice and may step in if it becomes necessary. The Nassau County Police Department and District Attorney’s Office are each conducting their own investigations into the issues with the police lab, however many defense attorneys say this is not enough and that a special investigator should be appointed.
Newsday has had excellent coverage of the Nassau County Crime Lab fiasco, for more information visit the following link, Newsday Coverage
At the Law Office of David Galison, P.C., we strive to ensure that your rights are protected. If you are charged with the possession or sale of any drug or alcohol related driving offense in Nassau, Suffolk or Queens County, contact the Law Office of David Galison, P.C. at 516-242-4477 to schedule a FREE CONSULTATION to discuss your case. Visit our website at: David Galison, P.C. 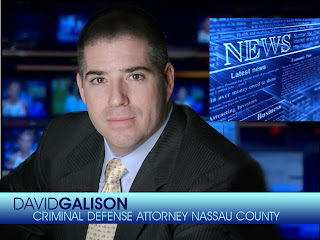